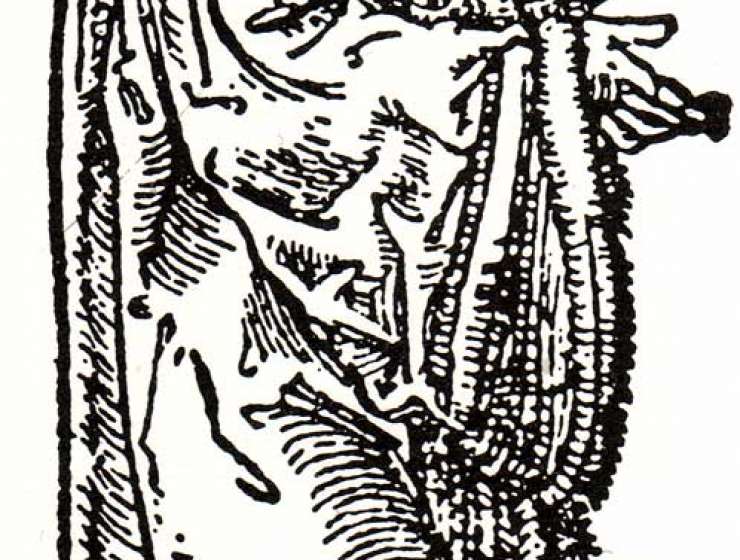 Johann Reuchlin (b. 1455–d. 1522) studied Roman law and Greek in Freiburg, Paris, Basel, Orleans, and Tübingen, where he became doctor of laws in 1485. But it was on diplomatic missions to Italy for Duke Eberhard of Württemberg that he first learned Hebrew and began collecting Hebrew manuscripts and books. After a rich legal career that included stints as chief justice in Speyer and, later, legal counsel to the Swabian League, he retired from politics in 1512 to devote himself to humanistic and Hebraic studies. Inspired by Pico della Mirandola, he studied the kabbalah and attempted to give it a Christian context.

From 1511 on, his work and discourse in Hebrew texts embroiled him in controversy. Johann Pfefferkorn, a Jewish convert, had embarked on a campaign against Hebrew books. An imperial commission solidly endorsed Pfefferkorn’s initiative. Reuchlin rendered the only dissenting opinion, leading to a bitter polemic with his fellow commissioners, mostly theologians from the University of Cologne. They accused Reuchlin of Judaism, an indictable offense that brought him before the Inquisition. The German humanists initiated a publicity campaign on his behalf. Initially acquitted, Reuchlin was condemned and fined by the pope on appeal (1520). It is not clear whether the judgment had been enforced by the time of Reuchlin’s death in 1522. Erasmus of Rotterdam, who had discreetly supported Reuchlin, lionized him on his death. In historiography, Reuchlin’s image has undergone significant change.

19th-century historians depicted him as a white knight succouring oppressed Jews. More recently praise for his equity and moral courage has been tempered by recognition of Reichlin’s own misgivings about the Jews. Reuchlin’s prosecution (the “Reuchlin Affair”) has also undergone shifts in interpretation. In his own time, Luther and his followers saw Reuchlin’s persecution by conservative theologians as foreshadowing the Reformation. Modern scholars have debated whether the Affair emerges more from the ongoing humanist-scholastic debate, peaking in Germany at the time (as depicted in the classic biography Johann Reuchlin: Sein Leben und seine Werke (Geiger 1964, cited under Biographies), or from the anti-Semitism of the age (see Reuchlin’s Trial). Most scholars today agree that both aspects had a bearing on the case (see Attitude toward Jews and Jewish Writingsand Reuchlin’s Trial).