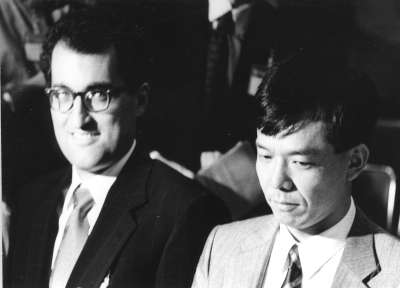 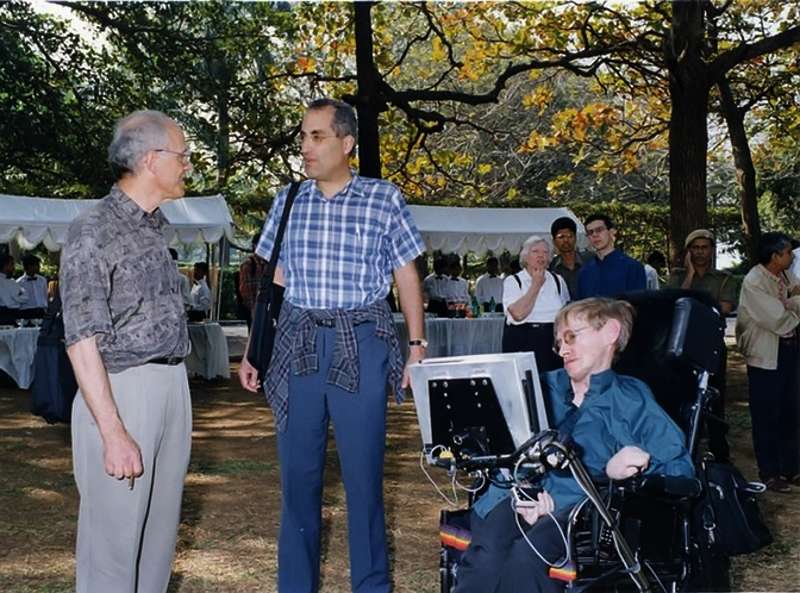 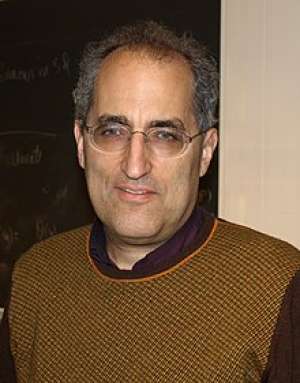 I'm actually, for the most part, a complete agnostic politically.

Edward Witten is an American mathematical and theoretical physicist. He is currently the Charles Simonyi Professor in the School of Natural Sciences at the Institute for Advanced Study. Witten is a researcher in string theory, quantum gravity, supersymmetric quantum field theories, and other areas of mathematical physics. In addition to his contributions to physics, Witten's work has significantly impacted pure mathematics. In 1990, he became the first physicist to be awarded a Fields Medal by the International Mathematical Union, awarded for his 1981 proof of the positive energy theorem in general relativity. He is considered to be the practical founder of M-theory.

Witten was born on August 26, 1951, in Baltimore, Maryland, to a Jewish family. He is the son of Lorraine née Wollach Witten and Louis Witten, a theoretical physicist specializing in gravitation and general relativity.

Witten attended the Park School of Baltimore class of '68, and received his Bachelor of Arts degree with a major in history and minor in linguistics from Brandeis University in 1971.

He had aspirations in journalism and politics and published articles in both The New Republic and The Nation in the late 1960s. In 1972 he worked for six months in George McGovern's presidential campaign.

Witten attended the University of Wisconsin–Madison for one semester as an economics graduate student before dropping out. He returned to academia, enrolling in applied mathematics at Princeton University in 1973, then shifting departments and receiving a Ph.D. in physics in 1976 and completing a dissertation titled "Some problems in the short distance analysis of gauge theories" under the supervision of David Gross. He held a fellowship at Harvard University 1976–77, visited Oxford University 1977–78, was a junior fellow in the Harvard Society of Fellows 1977–1980, and held a MacArthur Foundation fellowship 1982.

Witten was awarded the Fields Medal by the International Mathematical Union in 1990, becoming the first physicist to win the prize.

In a written address to the ICM, Michael Atiyah said of Witten,

Although he is definitely a physicist (as his list of publications clearly shows) his command of mathematics is rivaled by few mathematicians, and his ability to interpret physical ideas in mathematical form is quite unique. Time and again he has surprised the mathematical community by a brilliant application of physical insight leading to new and deep mathematical theorems... He has made a profound impact on contemporary mathematics. In his hands physics is once again providing a rich source of inspiration and insight in mathematics.

As an example of Witten's work in pure mathematics, Atiyah cites his application of techniques from quantum field theory to the mathematical subject of low-dimensional topology. In the late 1980s, Witten coined the term topological quantum field theory for a certain type of physical theory in which the expectation values of observable quantities encode information about the topology of spacetime. In particular, Witten realized that a physical theory now called Chern–Simons theory could provide a framework for understanding the mathematical theory of knots and 3-manifolds. Although Witten's work was based on the mathematically ill-defined notion of a Feynman path integral and was therefore not mathematically rigorous, mathematicians were able to systematically develop Witten's ideas, leading to the theory of Reshetikhin–Turaev invariants.

Another result for which Witten was awarded the Fields Medal was his proof in 1981 of the positive energy theorem in general relativity. This theorem asserts that under appropriate assumptions the total energy of a gravitating system is always positive and can be zero only if the geometry of spacetime is that of flat Minkowski space. It establishes Minkowski space as a stable ground state of the gravitational field. While the original proof of this result due to Richard Schoen and Shing-Tung Yau used variational methods, Witten's proof used ideas from supergravity theory to simplify the argument.

A third area mentioned in Atiyah's address is Witten's work relating supersymmetry and Morse theory, a branch of mathematics that studies the topology of manifolds using the concept of a differentiable function. Witten's work gave a physical proof of a classical result, the Morse inequalities, by interpreting the theory in terms of supersymmetric quantum mechanics.

By the mid 1990s, physicists working on string theory had developed five different consistent versions of the theory. These versions are known as type I, type IIA, type IIB, and the two flavors of heterotic string theory SO32 and E8×E8. The thinking was that out of these five candidate theories, only one was the actual correct theory of everything, and that theory was the one whose low-energy limit matched the physics observed in our world today.

Speaking at the string theory conference at University of Southern California in 1995, Witten made the surprising suggestion that these five string theories were in fact not distinct theories, but different limits of a single theory which he called M-theory. Witten's proposal was based on the observation that the five string theories can be mapped to one another by certain rules called dualities and are identified by these dualities. Witten's announcement led to a flurry of work now known as the second superstring revolution.

Another of his contributions to physics was to the result of gauge/gravity duality. In 1997, Juan Maldacena formulated a result known as the AdS/CFT correspondence, which establishes a relationship between certain quantum field theories and theories of quantum gravity. Maldacena's discovery has dominated high energy theoretical physics for the past 15 years because of its applications to theoretical problems in quantum gravity and quantum field theory. Witten's foundational work following Maldacena's result has shed light on this relationship.

In collaboration with Nathan Seiberg, Witten established several powerful results in quantum field theories. In their paper on string theory and noncommutative geometry, Seiberg and Witten studied certain noncommutative quantum field theories that arise as limits of string theory. In another well-known paper, they studied aspects of supersymmetric gauge theory. The latter paper, combined with Witten's earlier work on topological quantum field theory, led to developments in the topology of smooth 4-manifolds, in particular the notion of Seiberg–Witten invariants.

With Anton Kapustin, he has made deep mathematical connections between S-duality of gauge theories and the geometric Langlands correspondence. Partly in collaboration with Seiberg, one of his recent interests include aspects of field theoretical description of topological phases in condensed matter and non-supersymmetric dualities in field theories that, among other things, are of high relevance in condensed matter theory. From a generalization of SYK models from condensed matter and quantum chaos, he has also recently brought tensor models of Gurau to the relevance of holographic and quantum gravity theories.

In general, Witten has done influential and insightful works in many aspects of quantum field theories and mathematical physics, including the physics and mathematics of anomalies, integrability, dualities, localization, homologies and so on. Many of his results have deeply influenced many areas in theoretical physics often well beyond the original context of his results, including string theory, quantum gravity and topological condensed matter.

Witten has been honored with numerous awards including a MacArthur Grant 1982, the Fields Medal 1990, the Golden Plate Award of the American Academy of Achievement 1997, the Nemmers Prize in Mathematics 2000, the National Medal of Science 2002, Pythagoras Award 2005, the Henri Poincaré Prize 2006, the Crafoord Prize 2008, the Lorentz Medal 2010 the Isaac Newton Medal 2010 and the Fundamental Physics Prize 2012. Since 1999, he has been a Foreign Member of the Royal Society London, and in March 2016 was elected an Honorary Fellow of the Royal Society of Edinburgh. Pope Benedict XVI appointed Witten as a member of the Pontifical Academy of Sciences 2006. He also appeared in the list of TIME magazine's 100 most influential people of 2004. In 2012 he became a fellow of the American Mathematical Society. Witten was elected as a member of the American Academy of Arts and Sciences in 1984 and a member of the National Academy of Sciences in 1988.

In an informal poll at a 1990 cosmology conference, Witten received the largest number of mentions as "the smartest living physicist".

Witten sits on the board of directors of Americans for Peace Now and on the advisory council of J Street. He supports the two-state solution and advocates a boycott of Israeli institutions and economic activity beyond its 1967 borders, though not of Israel itself.

Stephen Hawking: Master of the Universe (2008) 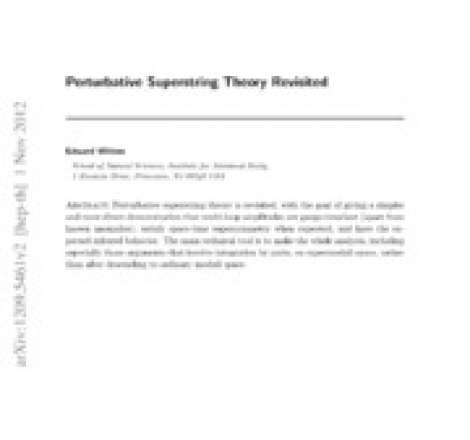 Physics
Notes On Super Riemann Surfaces And Their Moduli 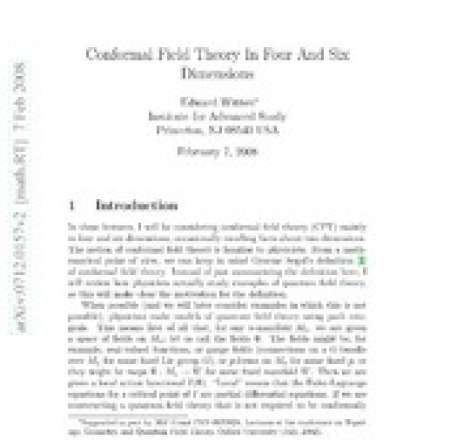 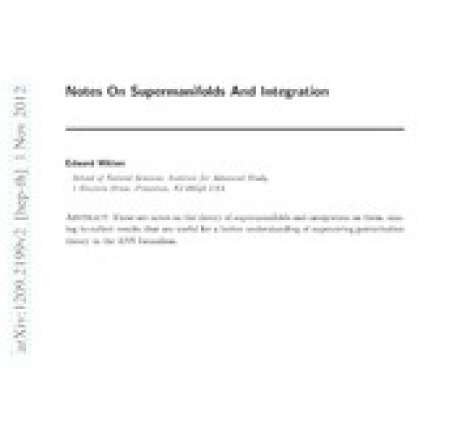 Physics
Notes On Supermanifolds and Integration 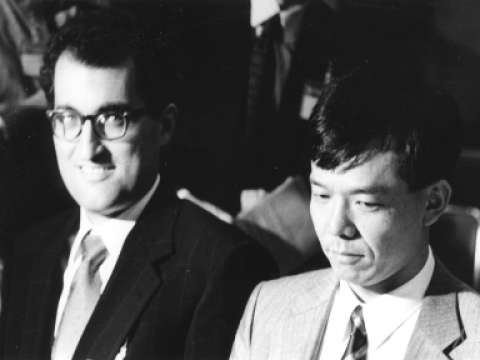 Edward Witten (left) with mathematician Shigefumi Mori, probably at the ICM in 1990, where they received the Fields Medal. 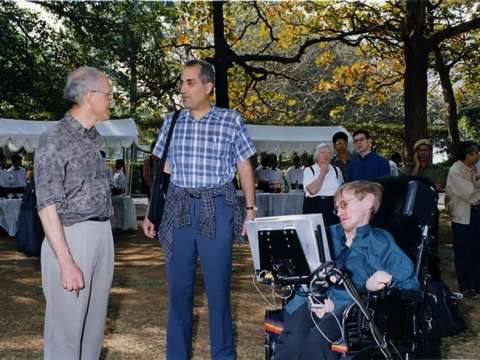 Edward Witten (center) with David Gross and Stephen Hawking at Strings 2001 at TIFR in Mumbai, India. 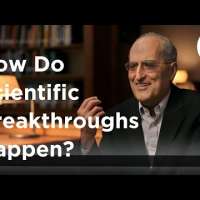 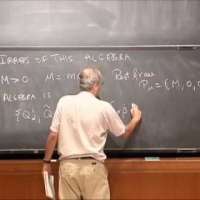 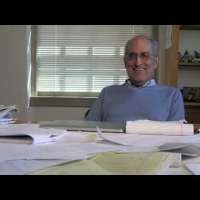 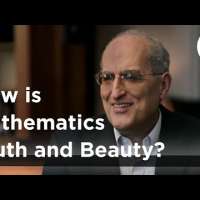 Edward Witten - How is Mathematics Truth and Beauty? 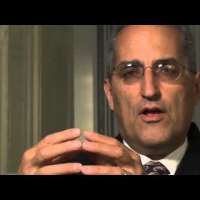 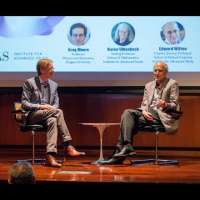 The Universe Speaks in Numbers: Robbert Dijkgraaf and Edward Witten in Conversation
Discussion 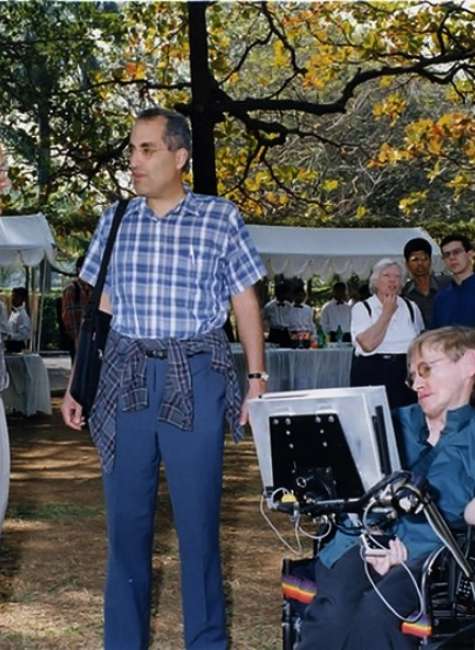 Physics
Physicist Edward Witten, on the trail of universal truth Interview with the Genius
www.baltimoresun.com
0 Comments 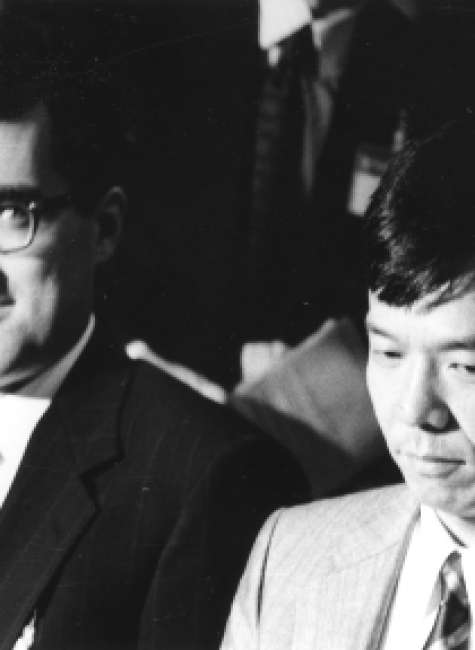 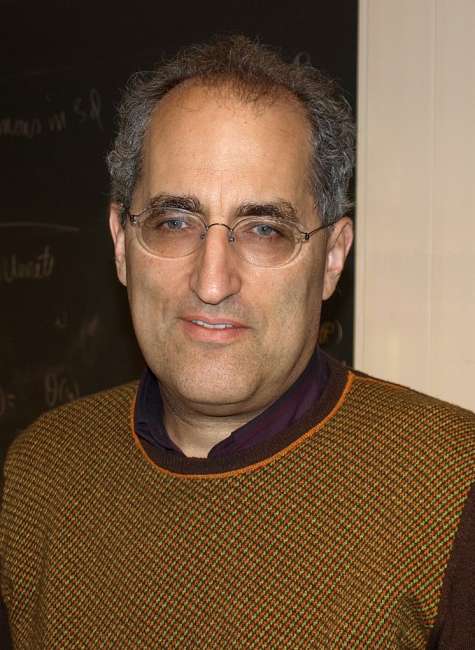