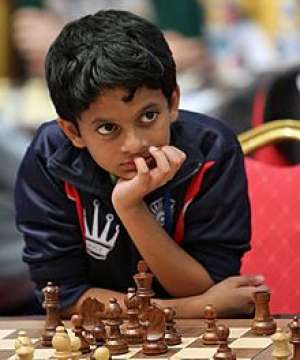 Nihal Sarin is a child prodigy and an Indian chess player grandmaster. As a chess prodigy, he achieved the title of Grandmaster at age 14. He is also the third youngest player in history to cross the Elo rating mark of 2600, accomplishing this feat at age 14.

Nihal was the world under-10 champion in 2014 in Durban, South Africa. In 2015, he tied for first place in the world under-12 championship in Porto Carras, Greece taking the silver medal on tiebreaks.

Nihal was born on 13 July 2004 in Thrissur in the Indian state of Kerala. Sarin Abdulsalam, Nihal’s father, is a dermatologist while his mother, Shijin Ammanam Veetil Ummar, is a psychiatrist. He spent his first few years in Kottayam.

He could recognize the capitals and the flags of 190 countries by the age of three. At the same age, he also had managed to know and recite from memory the scientific names of insects and plants. By the time he was in upper kindergarten, he was speaking fluently in English. By the time he turned six and enrolled into the first standard he knew the multiplication tables till sixteen.

Nihal learned chess at the age of six. In order to not make him feel bored during school vacations, his father introduced Nihal to a chess set and his grandfather A. A. Ummar taught him the rules at Kottayam where he was a student of Excelsior English School. Nihal was formally taught chess by Mathew P. Joseph Pottoore, the school's chess coach who instructed once a week in the beginning. He defeated him within a short time span and his family had to search for a new coach.

In 2011-12, Nihal and his family moved to Thrissur where Nihal joined Devamatha CMI Public School.

Nihal won the gold medal in the World Blitz Championship in the Under-10 category in Al-Ain in 2013. In the same category, he was the Rapid and Blitz gold medalist in the Asian Youth Championship in Tashkent in 2014.

Nihal's first big break came at the World Youth Chess Championship in the Under-10 category, which was held in Durban, South Africa in September 2014. He scored 9/11 to be crowned the Under-10 World Champion. For this achievement, he was conferred the Candidate Master CM title by FIDE.

The next year in 2015, he won the silver medal in the Under-12 category of World Youth Chess Championship WYCC, Greece starting as the 28th seed among 202 participants from 73 countries. In the last rounds of the tournament, Nihal successively defeated the top two seeds of his category: IM Awonder Liang in round seven, and FM Nodirbek Abdusattorov rated 2432 in round eight. He was conferred the FIDE Master title by the World chess Federation FIDE in the same year as he had crossed live Elo rating of 2300.

In the 2016 edition of the tournament held in Batumi, Georgia, Nihal scored 8½/11 and tied for the second spot with three others. He was fourth on tiebreak.

At the World Youth Chess Olympiad in December 2017, Nihal played for India Green, helping the country secure a silver medal. He also won an Individual gold on board three.

Nihal started playing competitive chess as a seven-year-old in the middle of 2011. He is a product of regular FIDE rated tournaments held in his home state Kerala and other parts of India under the aegis of the Kerala Chess Association and the All India Chess Federation.

In 2014, Nihal began to work with Ukrainian Dimitri Komarov, an experienced coach with international success in his playing days. Right after his World Youth success in 2014, Nihal scored his first victory over a titled player—IM Jonathan Westerberg of Sweden—at the World Junior Championship 2014 in Pune, India. For a year, Nihal was a regular in all the tournaments of importance held in India including the National Challengers Championship in Nagpur. He would regularly hold titled players to draws.

In Hasselbacken Open 2016 held at the turn of April in Stockholm, Nihal beat Lithuanian grandmaster Eduardas Rozentalis. The database website Chess-DB dubbed this performance as the ‘Game of the Day’ on 8 May 2016.

At the TV2 Fagernes International 2017, Nihal tied for the second place to finish with 6.0/9. He was fourth on the tiebreak and stayed undefeated throughout the tournament. In the process, he scored his maiden Grand Master norm. In 2017, Nihal increased his rating by 192 elo points to cross 2500 in rating.

At Reykjavik Open 2018 held in March, Nihal scored 6.0/9 with a rating performance of 2668 to score his second GM norm. The average rating of his opponents was 2543. He scored wins against grandmasters Ahmed Adly and Elshan Moradiabadi and drew with Richard Rapport, Gata Kamsky and Mustafa Yilmaz.

Nihal made his debut at the Isbank Turkish Super League in July 2018, leading the team Genc Akademisyenler on the first board. He scored 6.0/12 against an opposition made up of an average rating of 2590.

At the Abu Dhabi Masters 2018 held in August, Nihal tallied 5½/9 with a rating performance of 2626 to secure his third GM norm. He became the 53rd grandmaster of India and the twelfth youngest in history at the time.

Nihal made his debut in a super-tournament by competing in the TATA Steel Rapid Championship 2018. Starting as the last seed, Nihal scored 3.0/9, with draws against Viswanathan Anand, Shakhriyar Mamedyarov, Sergey Karjakin, Pentala Harikrishna, Vidit Gujrathi, and Surya Shekhar Ganguly, losing only three games to Hikaru Nakamura, Levon Aronian, and Wesley So. The event marked Nihal's first game against the legendary five-time world champion Anand who graciously commented after the game, "Going by the evidence so far, I would not rule it out Nihal becoming a world champion in future. It’s a long journey forward. At the end, he is just 14. I felt that he would really struggle in this tournament and he would be a bit out of place. It seemed the opposite. He seemed quite comfortable here. Not fully there, but he’s a huge talent what I’ve seen of him." Anand was quoted as saying by PTI.

Nihal ended 2018 with a spectacular performance at the World Blitz Championship in Saint Petersburg, Russia where he scored 13½/21 with a rating performance of 2777, taking the 11th place on tiebreak.

Nihal was an integral part of the Indian Chess Team that won the FIDE Online Chess Olympiad 2020.

Nihal's early coach Mathew P. Joseph Pottoore taught him the basics and made him fall in love with chess. From this point on, Mr. M.B. Muralidharan, Prof. N.R. Anil Kumar, Mr. C.T. Pathrose & K.K. Manikantan helped him to polish his skills. Nihal was trained by E.P. Nirmal from 2013 until 2015, helping him develop from a raw talent to a rising player.

He has been trained by Dimitri Komarov and Srinath Narayanan has trained him since 2016. Since 2016, Nihal began working independently on his game as well.

In his effort to popularize the sport of chess at the grassroots level, Nihal occasionally performs Simultaneous Exhibitions. At the age of 10 years at Thodupuzha, Kerala, he played simultaneously against 112 players of all age categories winning all his games.

He was also a guest competitor in the Malayalam TV quiz show Aswamedham in March 2015. It is a popular Malayalam reverse quiz game show hosted by G.S. Pradeep and aired on Kairali TV.

On the occasion of Children's Day in 2016, Nihal was chosen as one of the recipients of 'National child award for exceptional achievement' awarded by the then President of India Mr. Pranab Mukherjee.

On the day Nihal had become a grandmaster, his home state Kerala was ravaged by the 2018 Kerala floods, the biggest natural disaster in the state's history. Nihal contributed by raising Rs. 174,463/- approximately US$2500 via a live YouTube show hosted by Indian chess news portal ChessBase India. 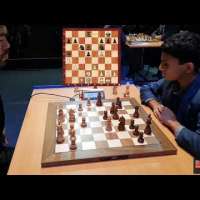 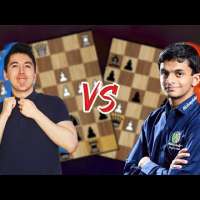 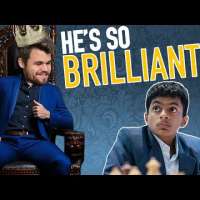 Is This Magnus Carlsen's Next Rival? 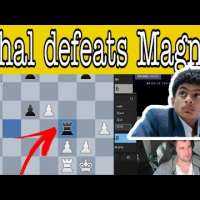 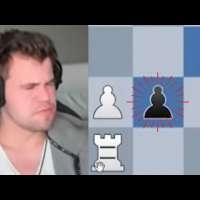 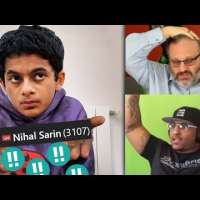 Magnus Carlsen vs Nihal Sarin - chess24 - 2021 - Ruy Lopez Opening
What Do You Think Of That Genius? 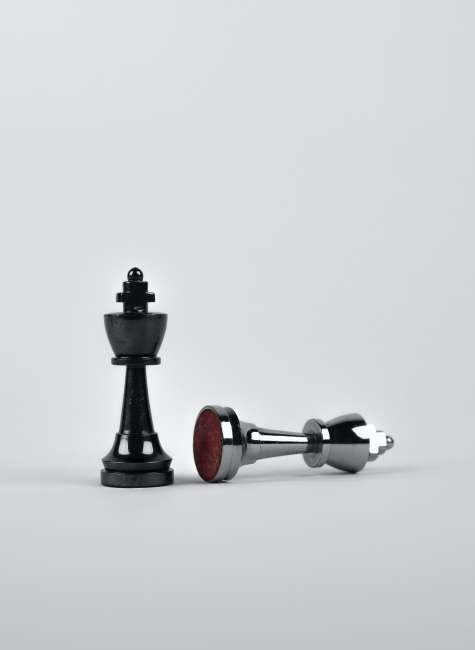 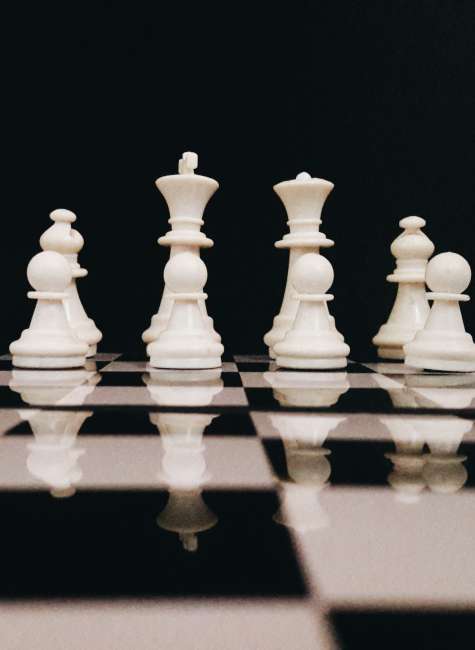