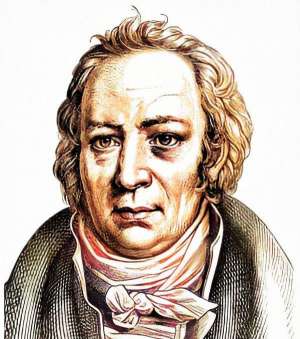 Friedrich August Wolf was a German Classicist and is considered the founder of modern Philology.

He was born in Hainrode, near Nordhausen. His father was the village schoolmaster and organist. In grammar school, he studied Latin and Greek as well as French, Italian, Spanish, and music.

In 1777, after two years of independent study, at the age of eighteen, Wolf went to the University of Göttingen. Legend has it that he chose to enroll in the department of "philology", despite the fact that the university had none. His enrollment was nonetheless accepted as submitted.

From 1779 to 1783, he taught at Ilfeld and Osterode. He published an edition of Plato's Symposium, and in 1783, he was awarded a chair at the University of Halle in Prussia.

It was in Halle 1783–1807, with the support of ministers serving under Frederick the Great, that Wolf first laid down the principles of the field he would call "Philology". He defined philology as the study of human nature as exhibited in antiquity. Its methods include the examination of the history, writing, art and other examples of ancient cultures. It combines the study of history and language, through interpretation, in which history and linguistics coalesce into an organic whole. This was the ideal of Wolf's philological seminarium at Halle.

During Wolf's time at Halle he published his commentary on the Leptines of Demosthenes 1789, which influenced his student Philipp August Böckh. He also published the Prolegomena ad Homerum 1795, which led to accusations of plagiarism by Heyne.

The Halle professorship ended after the French invasion of 1806. He relocated to Berlin, where he received assistance from Wilhelm von Humboldt. He died on the road to Marseille, and was buried there. In 1840 a medal was struck in his honor.

Best Known For: German classicist; noted as founder of modern philology;
What Do You Think Of That Genius?