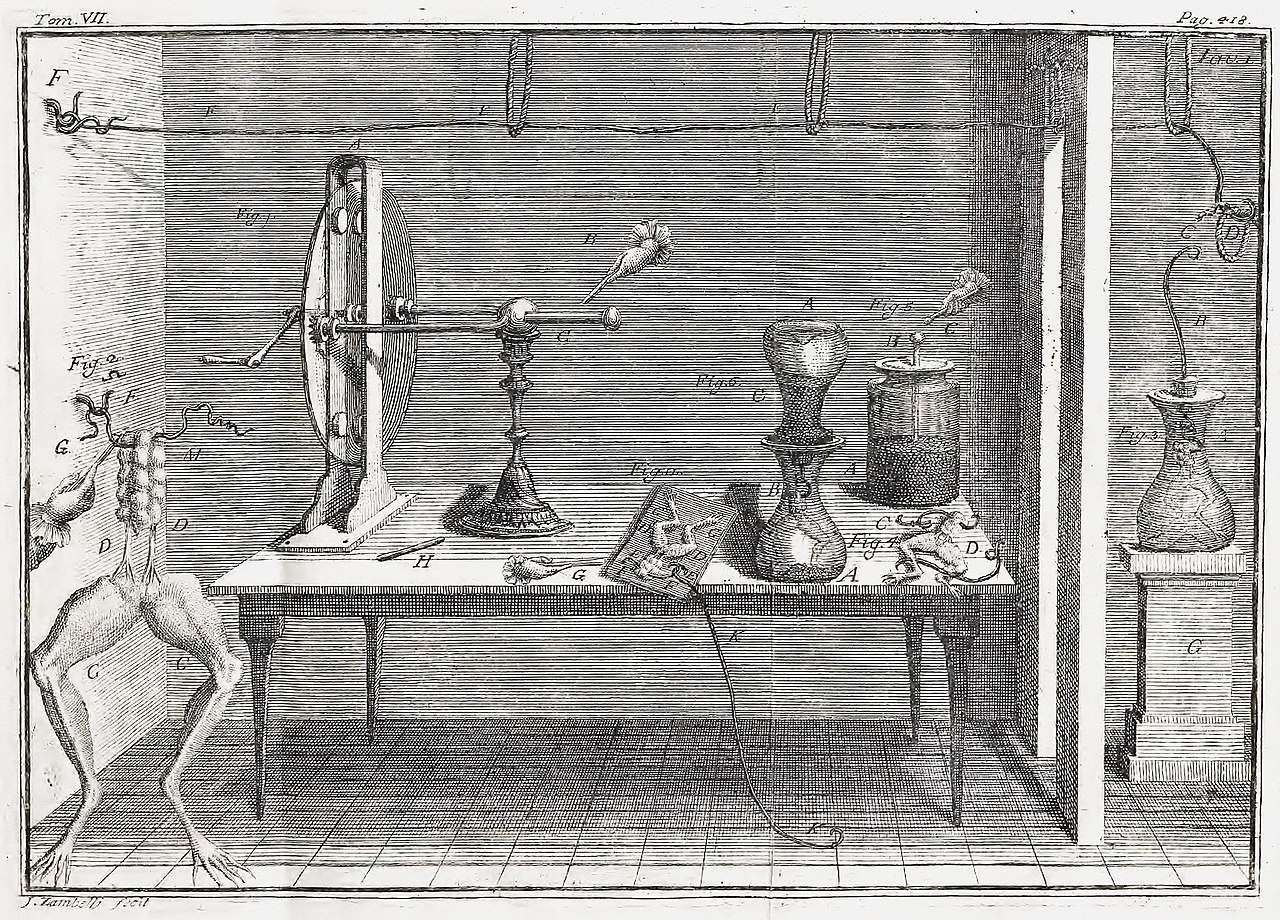 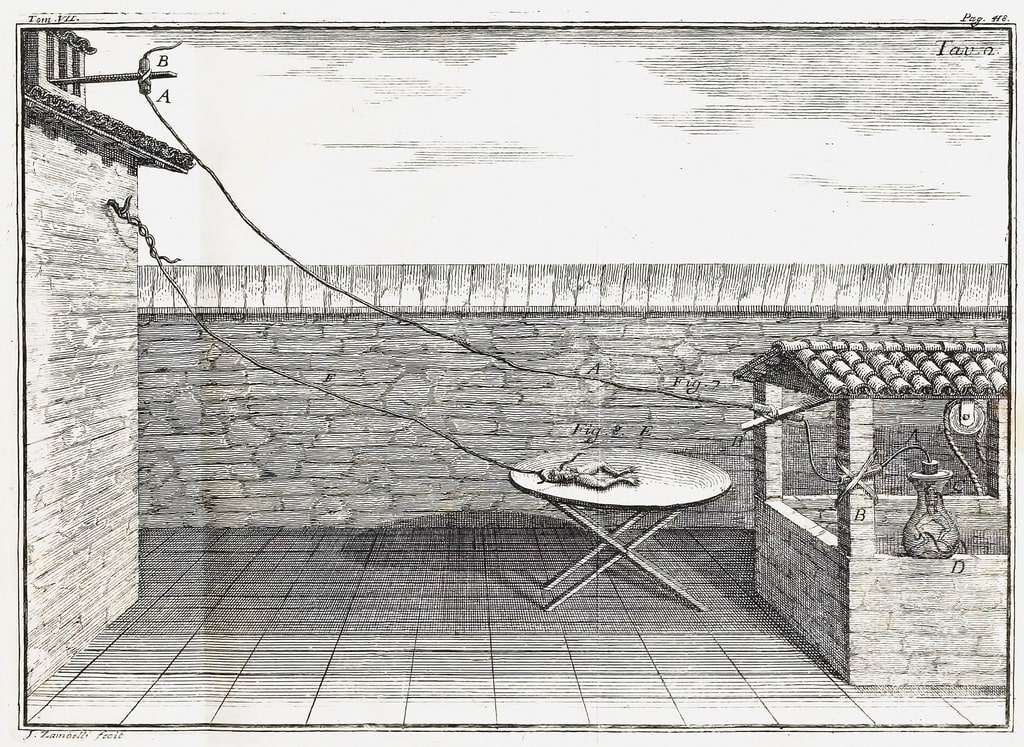 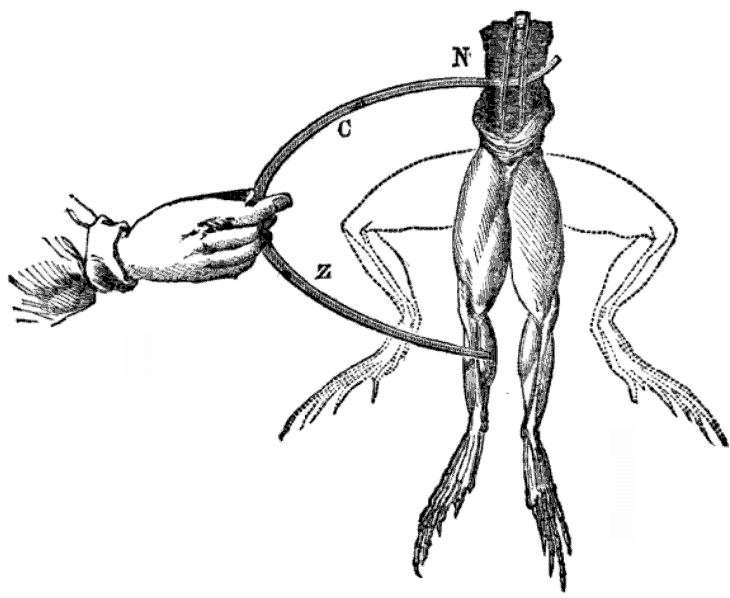 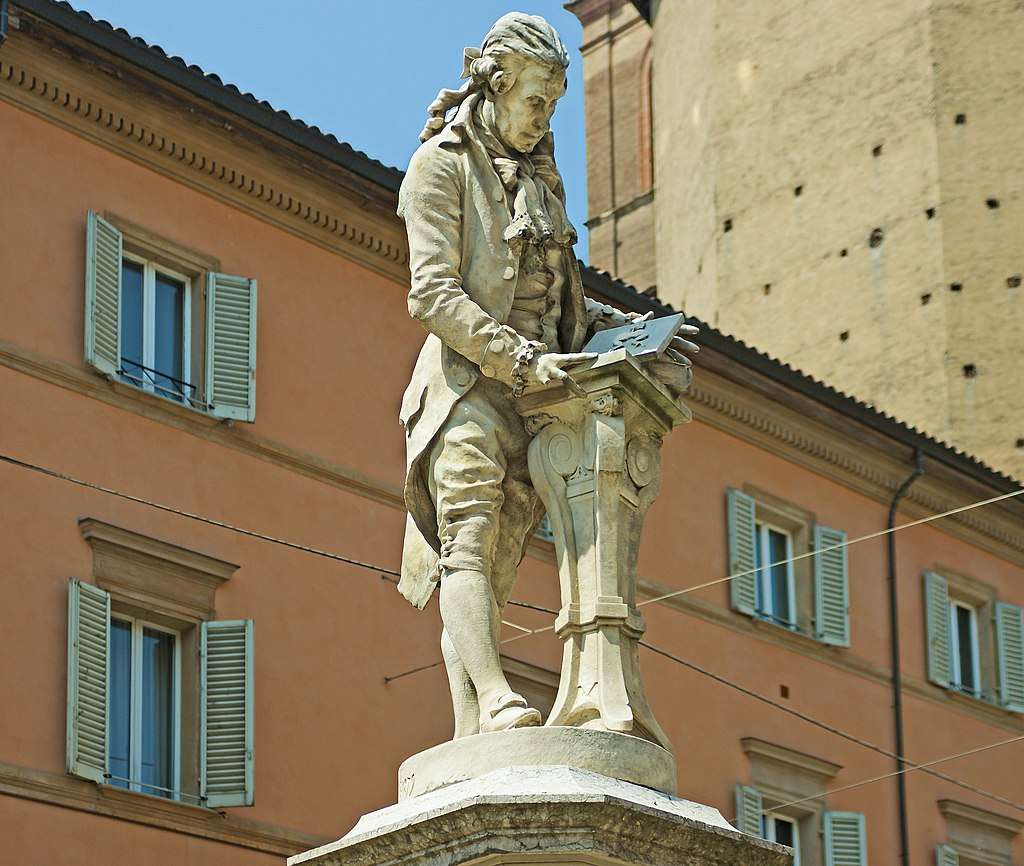 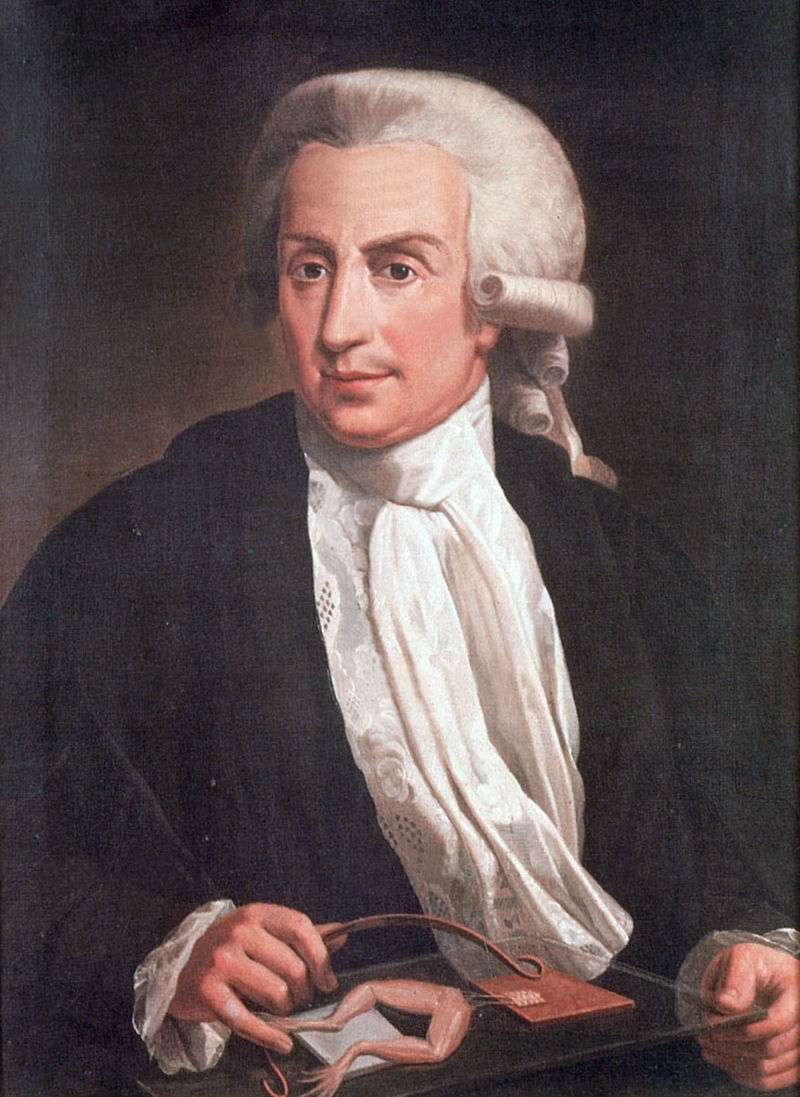 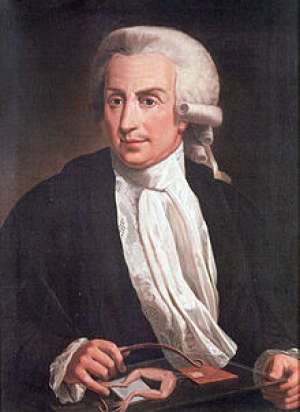 Is it possible that the Pentateuch could not have been written by uninspired men? that the assistance of God was necessary to produce these books? Is it possible that Galilei ascertained the mechanical principles of 'Virtual Velocity,' the laws of falling bodies and of all motion; that Copernicus ascertained the true position of the earth and accounted for all celestial phenomena; that Kepler discovered his three laws—discoveries of such importance that the 8th of May, 1618, may be called the birth-day of modern science; that Newton gave to the world the Method of Fluxions, the Theory of Universal Gravitation, and the Decomposition of Light; that Euclid, Cavalieri, Descartes, and Leibniz, almost completed the science of mathematics; that all the discoveries in optics, hydrostatics, pneumatics and chemistry, the experiments, discoveries, and inventions of Galvani, Volta, Franklin and Morse, of Trevithick, Watt and Fulton and of all the pioneers of progress—that all this was accomplished by uninspired men, while the writer of the Pentateuch was directed and inspired by an infinite God? Is it possible that the codes of China, India, Egypt, Greece and Rome were made by man, and that the laws recorded in the Pentateuch were alone given by God? Is it possible that Æschylus and Shakespeare, Burns, and Beranger, Goethe and Schiller, and all the poets of the world, and all their wondrous tragedies and songs are but the work of men, while no intelligence except the infinite God could be the author of the Pentateuch? Is it possible that of all the books that crowd the libraries of the world, the books of science, fiction, history and song, that all save only one, have been produced by man? Is it possible that of all these, the bible only is the work of God?

Luigi Galvani was an Italian physician, physicist, biologist and philosopher, who discovered animal electricity. He is recognized as the pioneer of bioelectromagnetics. In 1780, he and his wife Lucia discovered that the muscles of dead frogs' legs twitched when struck by an electrical spark.:67–71 This was one of the first forays into the study of bioelectricity, a field that studies the electrical patterns and signals from tissues such as the nerves and muscles.

Luigi Galvani was born to Domenico and Barbara Caterina Foschi, in Bologna, then part of the Papal States. Domenico was a goldsmith, and Barbara was his fourth wife. His family was not aristocratic, but they could afford to send at least one of their sons to study at a university. At first, Galvani wished to enter the church, so he joined a religious institution, Oratorio dei Padri Filippini, at 15 years old. He planned to take religious vows, but his parents persuaded him not to do so. Around 1755, Galvani entered the Faculty of the Arts of the University of Bologna. Galvani attended the medicine course, which lasted four years, and was characterized by its "bookish" teaching. Texts that dominated this course were by Hippocrates, Galen, and Avicenna.

Another discipline Galvani learned alongside medicine was surgery. He learned the theory and practice. This part of his biography is typically overlooked, but it helped with his experiments with animals and helped familiarize Galvani with the manipulation of a living body.

In 1759, Galvani graduated with degrees in medicine and philosophy. He applied for a position as a lecturer at the university. Part of this process required him to defend his thesis on 21 June 1761. In the following year, 1762, he became a permanent anatomist of the university and was appointed honorary lecturer of surgery. That same year he married Lucia Galeazzi, daughter of one of his professors, Gusmano Galeazzi. Galvani moved into the Galeazzi house and helped with his father-in-law's research. Lucia Galeazzi Galvani was actively engaged in the experiments; the couple also collaborated with Antonio Muzzi. When Galeazzi died in 1775, Galvani was appointed professor and lecturer in Galeazzi's place.

Galvani moved from the position of lecturer of surgery to theoretical anatomy and obtained an appointment at the Academy of Sciences in 1776. His new appointment consisted of the practical teaching of anatomy, which was conducted by human dissection and the use of the famous anatomical waxes. Lucia Galeazzi Galvani also was active as the medical assistant of her husband in his work as a surgeon and obstetrician. She additionally edited her husband's medical texts.

As a "Benedectine member" of the Academy of Sciences, Galvani had specific responsibilities. His main responsibility was to present at least one research paper every year at the Academy, which Galvani did until his death. There was a periodical publication that collected a selection of the memoirs presented at the institution and was sent around to main scientific academies and institutions around the world. However, since publication then was so slow, sometimes there were debates on the priority of the topics used. One of these debates occurred with Antonio Scarpa. This debate caused Galvani to give up the field of research on which he had presented for four years in a row: the hearing of birds, quadrupeds, and humans. Galvani had announced all of the findings in his talks but had yet to publish them. It is suspected that Scarpa attended Galvani's public dissertation and claimed some of Galvani's discoveries without crediting him.

Galvani then began taking an interest in the field of "medical electricity". This field emerged in the middle of the 18th century, following the electrical researches and the discovery of the effects of electricity on the human body.

The beginning of Galvani's experiments with bioelectricity has a popular legend which says that Galvani was slowly skinning a frog at a table where he and his wife had been conducting experiments with static electricity by rubbing frog skin. Galvani's assistant touched an exposed sciatic nerve of the frog with a metal scalpel that had picked up a charge. At that moment, they saw sparks and the dead frog's leg kicked as if in life. The observation made the Galvanis the first investigators to appreciate the relationship between electricity and animation—or life. This finding provided the basis for the new understanding that the impetus behind muscle movement was electrical energy carried by a liquid ions, and not air or fluid as in earlier balloonist theories.

Galvani coined the term animal electricity to describe the force that activated the muscles of his specimens. Along with contemporaries, he regarded their activation as being generated by an electrical fluid that is carried to the muscles by the nerves. The phenomenon was dubbed galvanism, after Galvani and his wife, on the suggestion of his peer and sometime intellectual adversary Alessandro Volta. The Galvanis are properly credited with the discovery of bioelectricity. Today, the study of galvanic effects in biology is called electrophysiology, the term galvanism being used only in historical contexts.

Volta, a professor of experimental physics in the University of Pavia, was among the first scientists who repeated and checked Galvani’s experiments. At first, he embraced animal electricity. However, he started to doubt that the conductions were caused by specific electricity intrinsic to the animal's legs or other body parts. Volta believed that the contractions depended on the metal cable Galvani used to connect the nerves and muscles in his experiments.

Every cell has a cell potential; biological electricity has the same chemical underpinnings as the current between electrochemical cells, and thus can be duplicated outside the body. Volta's intuition was correct. Volta, essentially, objected to Galvani’s conclusions about "animal electric fluid", but the two scientists disagreed respectfully and Volta coined the term "Galvanism" for a direct current of electricity produced by chemical action. Thus, owing to an argument between the two in regard to the source or cause of the electricity, Volta built the first battery in order to specifically disprove his associate's theory. Volta's “pile” became known therefore as a voltaic pile.

Since Galvani was reluctant to intervene in the controversy with Volta, he trusted his nephew, Giovanni Aldini, to act as the main defender of the theory of animal electricity.

Galvani’s home in Bologna has been preserved and can be seen in the central.

Galvani’s monument. In the square dedicated to him, facing the palace of the Archiginnasio, the ancient seat of the University of Bologna, a big marble statue has been erected to the scientist while observing one of his famous frog experiments.

Religious beliefs are- Galvani, according to William Fox, was “by nature courageous and religious.” said of Galvani that he never ended his lessons “without exhorting his hearers and leading them back to the idea of that eternal Providence, which develops, conserves, and circulates life among so many diverse beings.”

Galvani actively investigated animal electricity until the end of his life. The Cisalpine Republic, a French client state founded in 1797 after the French occupation of Northern Italy, required every university professor to swear loyalty to the new authority. Galvani, who disagreed with the social and political confusion, refused to swear loyalty, along with other colleagues. This led to the new authority depriving him of all his academic and public positions, which took every financial support away. Galvani died peacefully surrounded by his mother and father, in his brother’s house depressed and in poverty, on 4 December 1798. 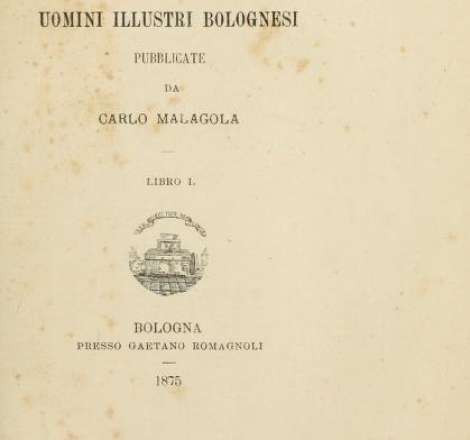 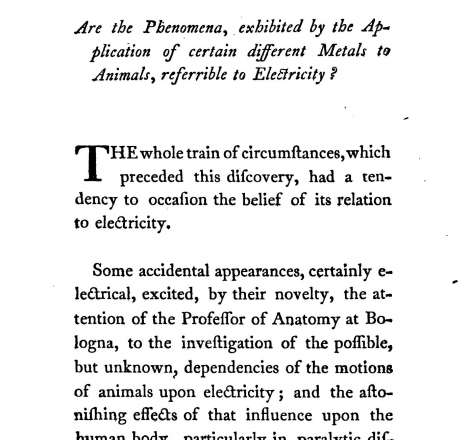 Biology
Experiments and Observations Relative to the Influence Lately Discovered by M. Galvani 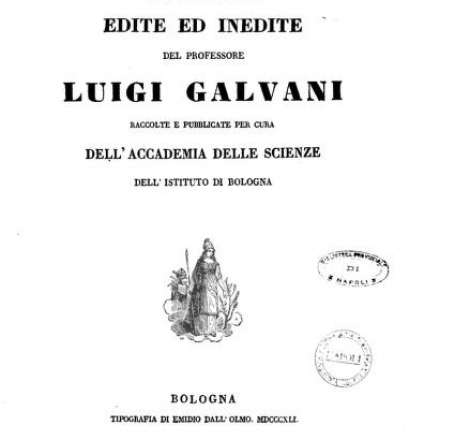 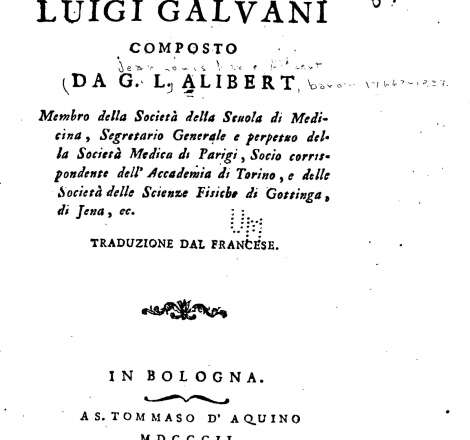 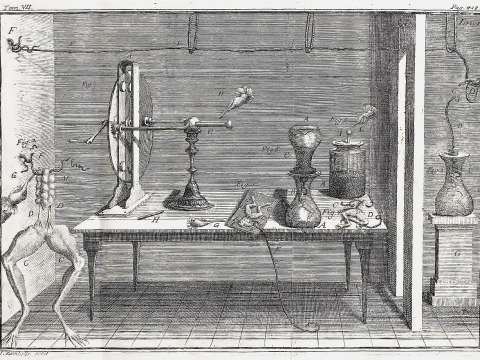 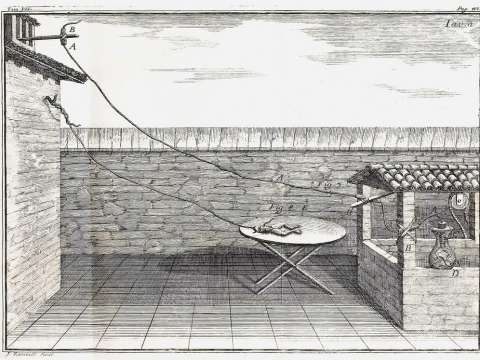 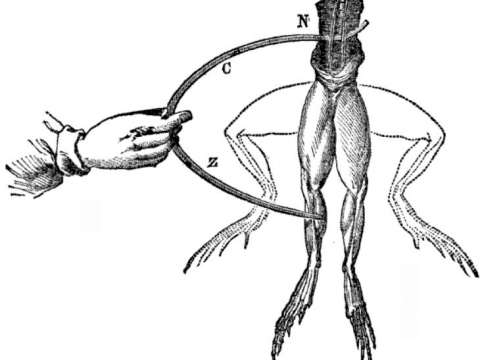 Electrodes touch a frog, and the legs twitch into the upward position 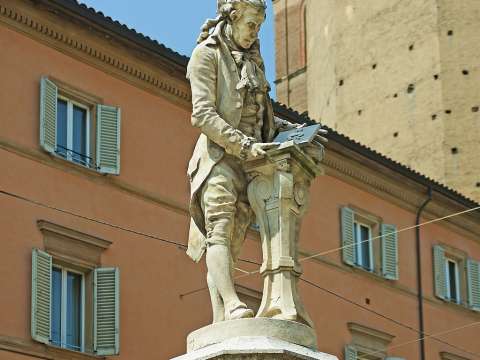 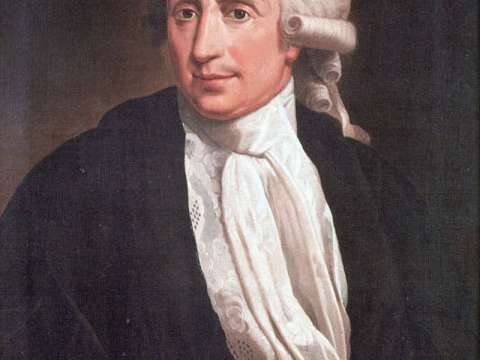 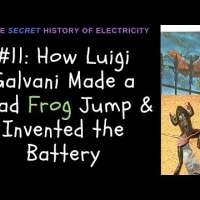 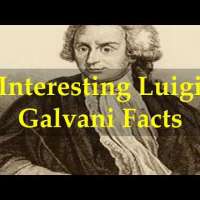 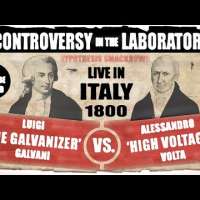 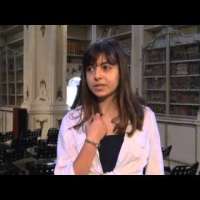 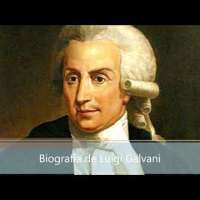 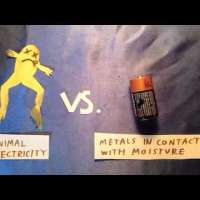 A Brief History of Galvanism
What Do You Think Of That Genius? 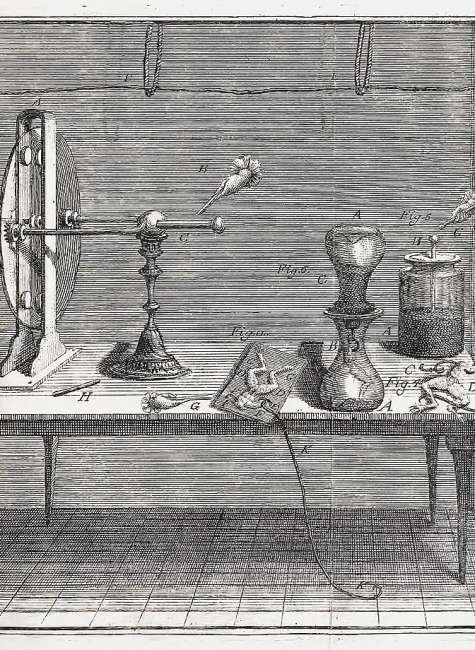 Biology
Medicine and science in the life of Luigi Galvani
pubmed.ncbi.nlm.nih.gov
0 Comments 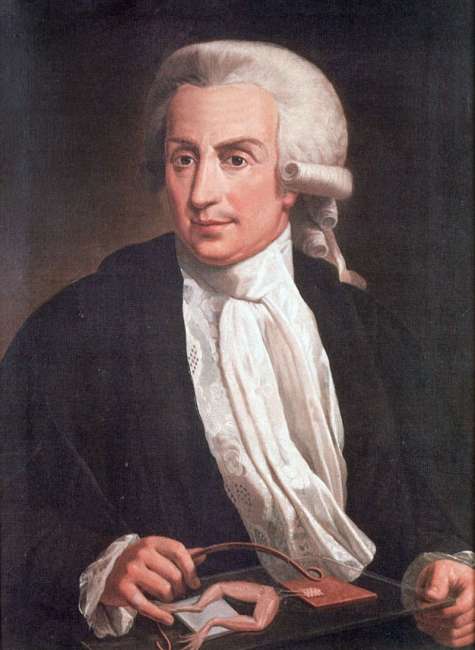