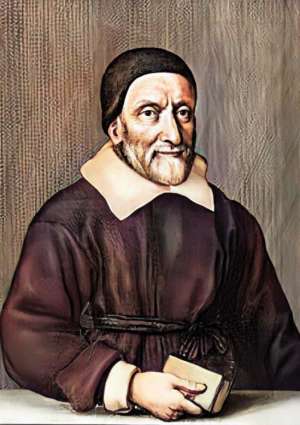 William Oughtred /ˈɔːtərd/ AWT-ed; 5 March 1574 – 30 June 1660 was an English mathematician and Anglican clergyman. After John Napier invented logarithms and Edmund Gunter created the logarithmic scales lines, or rules upon which slide rules are based, Oughtred was the first to use two such scales sliding by one another to perform direct multiplication and division. He is credited with inventing the slide rule in about 1622. He also introduced the "×" symbol for multiplication and the abbreviations "sin" and "cos" for the sine and cosine functions.

Oughtred was born at Eton in Buckinghamshire now part of Berkshire, and educated at Eton College and King's College, Cambridge of which he became fellow. Being admitted to holy orders, he left the University of Cambridge about 1603, for a living at Shalford in Surrey; he was presented in 1610 to the rectory of Albury, near Guildford in Surrey, where he settled. He was rector of Albury for fifty years. His father was a writing-master at Eton College and taught him as well. Oughtred had a passion for mathematics, as he would stay up most nights and learn, while others were sleeping. A primary source for his life is his address "To the English gentrie" in his Just Apologie of c. 1634, which contains autobiographical material.

On 20 February 1606, he married Christsgift Caryll, niece of the Caryll family of Tangley Hall at Wonersh in Surrey, of which Lady Elizabeth Aungier daughter of Sir Francis, wife of Simon Caryll 1607–1619, was matriarch and then dowager until her death in about 1650. The Oughtreds had twelve children, William, Henry, Henry the first Henry died as a baby, Benjamin, Simon, Margaret, Judith, Edward, Elizabeth, Anne, George, and John. Two of his sons, Benjamin and John, shared Oughtred's interest in instruments and became watchmakers.

About 1628 he was appointed by the Earl of Arundel to instruct his son in mathematics. He corresponded with some of the most eminent scholars of his time, including William Alabaster, Sir Charles Cavendish, and William Gascoigne. He kept up regular contacts with Gresham College, where he knew Henry Briggs and Gunter.

He offered free mathematical tuition to pupils, who included Richard Delamain, and Jonas Moore, making him an influential teacher of a generation of mathematicians. Seth Ward resided with Oughtred for six months to learn contemporary mathematics, and the physician Charles Scarburgh also stayed at Albury; John Wallis, and Christopher Wren corresponded with him. Another Albury pupil was Robert Wood, who helped him get the Clavis through the press.

The invention of the slide rule involved Oughtred in a priority dispute with Delamain. They also disagreed on pedagogy in mathematics, with Oughtred arguing that theory should precede practice.

He remained rector until his death in 1660 at Albury, a month after the restoration of Charles II. He was buried in Old St Peter and St Paul's Church, Albury.

Interest in the occult

According to his contemporaries, Oughtred had an interest in alchemy and astrology.

William Lilly, an eminent astrologer, knew Oughtred and claimed in his autobiography to have intervened on his behalf to prevent his ejection by Parliament in 1646;

John Aubrey states that despite their political differences he was also defended by Sir Richard Onslow. He adds that Oughtred was an astrologer, and successful in the use of natal astrology, saying that he did not know why it should be effective, but believing that some "genius" or "spirit" assisted. According to Aubrey, Elias Ashmole possessed the original copy in Oughtred's handwriting of his rational division of the twelve houses of the zodiac, namely the text which George Wharton inserted in his Almanac for 1659. The text of the English abstract of The Cabal of the Twelve Houses Astrological by "Morinus" Jean-Baptiste Morin appears over Oughtred's name with the date 16 October 1659 in Wharton's publications. Aubrey suggests that Oughtred was happy to allow the country people to believe that he was capable of conjuring. He himself had seen a copy of Christopher Cattan's work on Geomancy annotated by Oughtred. He reported that Oughtred had told Bishop Ward and Elias Ashmole that he had received sudden intuitions or solutions to problems when standing in particular places, or leaning against a particular oak or ash tree, "as if infused by a divine genius", after having pondered those problems unsuccessfully for months or years.

Oughtred's name has been mentioned in purported histories of early freemasonry, a suggestion that Oughtred was present at Elias Ashmole's 1646 initiation going back to Thomas De Quincey. Oughtred expressed millenarian views to John Evelyn in 1655:

William Oughtred's most important work is Clavis Mathematicae, The Key to Mathematics, published in 1631 this is a textbook on elementary algebra. Clavis Mathematicae became a classic, reprinted in several editions, this textbook was used by John Wallis and Isaac Newton among others. The book is concise and argued for a less verbose style of mathematics, with a greater dependence on symbols. Drawing on François Viète though not explicitly, Oughtred also innovated freely with symbols, introducing not only the multiplication sign as now used universally, but also the proportion sign double colon ::. The book became popular around 15 years later, as mathematics took a greater role in higher education. Wallis wrote the introduction to his 1652 edition, and used it to publicise his skill as cryptographer; in another, Oughtred promoted the talents of Wren.

Other works were a treatise on navigation entitled Circles of Proportion, in 1632, and a book on trigonometry and dialling, and his Opuscula Mathematica, published posthumously in 1676. He invented a universal equinoctial ring dial of two rings. These three books are important in the development of basic and elementary mathematics.

The first edition of the Clavis Mathematicae was published in 1631 that consisted of 20 chapters and 88 pages that included algebra and several fundamentals of mathematics. Some changes were then added by Oughtred to the first edition, and a second and third edition were made in 1647 and 1648, having no preface and reducing the book by one chapter.

This book opens up with a discussion of the Hindu-Arabic notation of decimal fractions and later in the book, introduces multiplication and division sign abbreviations of decimal fractions. He also discusses two ways to do long division and introduces the "~" symbol, in terms of mathematics, expressing the difference between two variables.

Circles of Proportion and the Horizontal Instrument

In the Circles of Proportion and the Horizontal Instrument, Oughtred introduces the abbreviations for trigonometric functions. This book was originally in manuscript before it eventually became published. Also, the slide rule is discussed, an invention that was made by Oughtred which provided a mechanical method of finding logarithmic results.

It is mentioned in this book that John Napier was the first person to ever use to the decimal point and comma, however Bartholomaeus Pitiscus was actually the first to do so.

Trigonometria contains about 36 pages of writing. In this book, the abbreviations for the trigonometric functions are explained in further detail consisting of mathematical tables.

Oughtred's invention of the slide rule consisted of taking a single "rule", already known to Gunter, and simplifying the method of employing it. Gunter required the use of a pair of dividers to lay off distances on his rule; Oughtred made the step of sliding two rules past each other to achieve the same ends. His original design of some time in the 1620s was for a circular slide rule; but he was not the first into print with this idea, which was published by Delamain in 1630. The conventional design of a sliding middle section for a linear rule was an invention of the 1650s.

At the age of 23, Oughtred invented the double horizontal sundial, now named the Oughtred type after him. A short description The description and use of the double Horizontall Dyall 16 pp. was added to a 1653 edition in English translation of the pioneer book on recreational mathematics, Récréations Mathématiques 1624 by Hendrik van Etten, a pseudonym of Jean Leurechon. The translation itself is no longer attributed to Oughtred, but probably to Francis Malthus.

Best Known For: Slide ruleMultiplication "×" sign
What Do You Think Of That Genius?