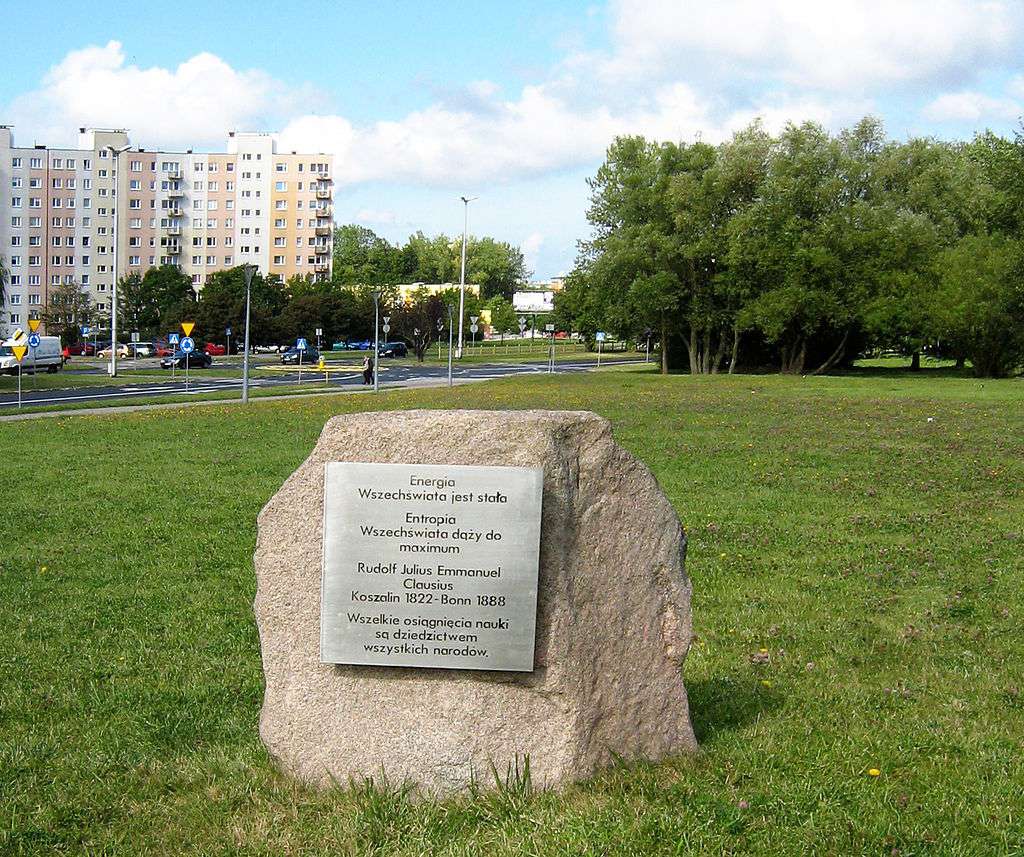 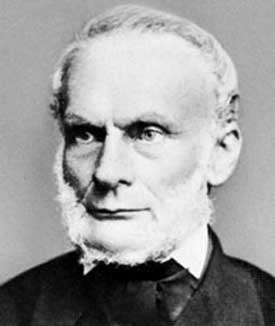 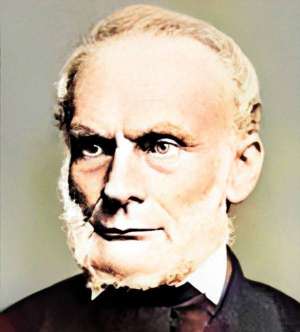 The algebraic sum of all the transformations occurring in a cyclical process can only be positive, or, as an extreme case, equal to nothing.

Rudolf Julius Emanuel Clausius was a German physicist and mathematician and is considered one of the central founders of the science of thermodynamics. By his restatement of Sadi Carnot's principle known as the Carnot cycle, he gave the theory of heat a truer and sounder basis. His most important paper, "On the Moving Force of Heat", published in 1850, first stated the basic ideas of the second law of thermodynamics. In 1865 he introduced the concept of entropy. In 1870 he introduced the virial theorem which applied to heat.

Clausius was born in Köslin now Koszalin, Poland in the Province of Pomerania in Prussia. His father was a Protestant pastor and school inspector, and Rudolf studied in the school of his father. In 1838, he went to the Gymnasium in Stettin. Clausius graduated from the University of Berlin in 1844 where he had studied mathematics and physics since 1840 with, among others, Gustav Magnus, Peter Gustav Lejeune Dirichlet and Jakob Steiner. He also studied history with Leopold von Ranke. During 1848, he got his doctorate from the University of Halle on optical effects in Earth's atmosphere. In 1850 he became professor of physics at the Royal Artillery and Engineering School in Berlin and Privatdozent at the Berlin University. In 1855 he became professor at the ETH Zürich, the Swiss Federal Institute of Technology in Zürich, where he stayed until 1867. During that year, he moved to Würzburg and two years later, in 1869 to Bonn.

In 1870 Clausius organized an ambulance corps in the Franco-Prussian War. He was wounded in battle, leaving him with a lasting disability. He was awarded the Iron Cross for his services.

His wife, Adelheid Rimpau died in 1875, leaving him to raise their six children. In 1886, he married Sophie Sack, and then had another child. Two years later, on 24 August 1888, he died in Bonn, Germany.

Clausius's PhD thesis concerning the refraction of light proposed that we see a blue sky during the day, and various shades of red at sunrise and sunset among other phenomena due to reflection and refraction of light. Later, Lord Rayleigh would show that it was in fact due to the scattering of light, but regardless, Clausius used a far more mathematical approach than some have used.

His most famous paper, Ueber die bewegende Kraft der Wärme "On the Moving Force of Heat and the Laws of Heat which may be Deduced Therefrom" was published in 1850, and dealt with the mechanical theory of heat. In this paper, he showed that there was a contradiction between Carnot's principle and the concept of conservation of energy. Clausius restated the two laws of thermodynamics to overcome this contradiction the third law was developed by Walther Nernst, during the years 1906–1912. This paper made him famous among scientists.

Clausius' most famous statement of thermodynamics second law was published in German in 1854, and in English in 1856.

Heat can never pass from a colder to a warmer body without some other change, connected therewith, occurring at the same time.

During 1857, Clausius contributed to the field of kinetic theory after refining August Krönig's very simple gas-kinetic model to include translational, rotational and vibrational molecular motions. In this same work he introduced the concept of 'Mean free path' of a particle.

Clausius deduced the Clausius–Clapeyron relation from thermodynamics. This relation, which is a way of characterizing the phase transition between two states of matter such as solid and liquid, had originally been developed in 1834 by Émile Clapeyron.

In 1865, Clausius gave the first mathematical version of the concept of entropy, and also gave it its name. Clausius chose the word because the meaning from Greek ἐν en "in" and τροπή tropē "transformation" is "content transformative" or "transformation content" "Verwandlungsinhalt". He used the now abandoned unit 'Clausius' symbol: Cl for entropy.

The landmark 1865 paper in which he introduced the concept of entropy ends with the following summary of the first and second laws of thermodynamics: 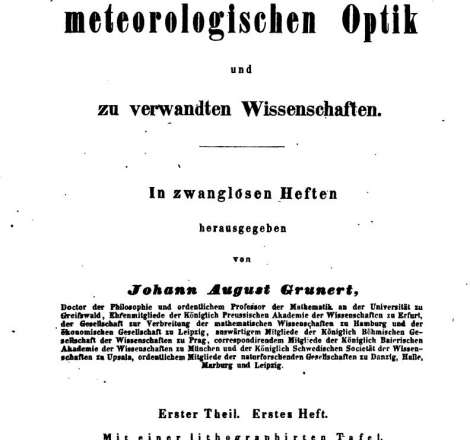 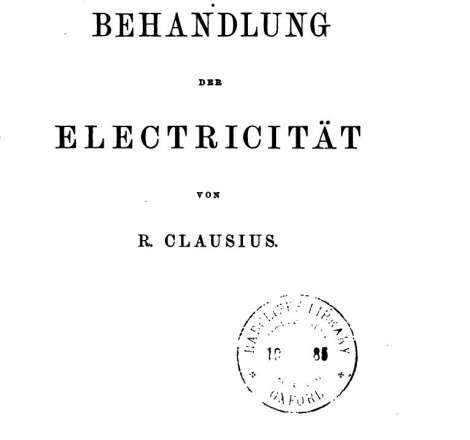 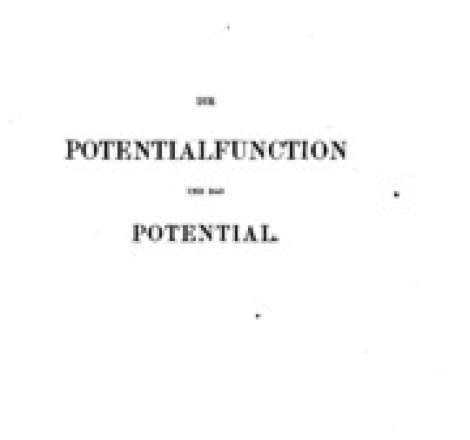 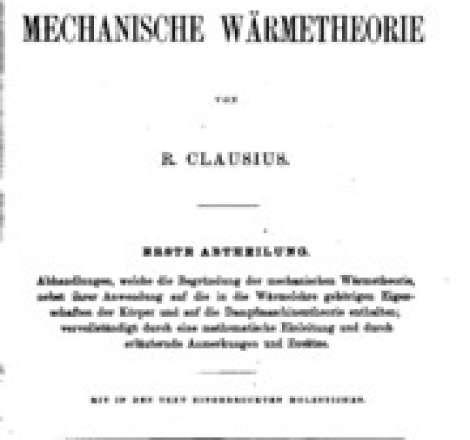 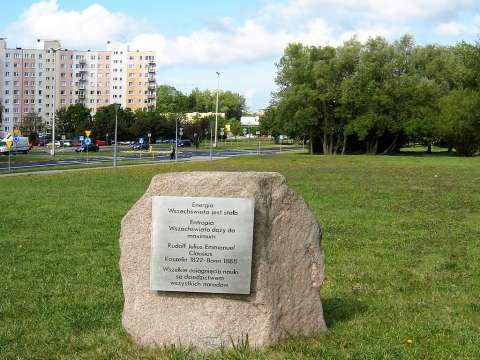 Memorial stone in front of Koszalin University of Technology, with the laws of thermodynamics as formulated by Clausius 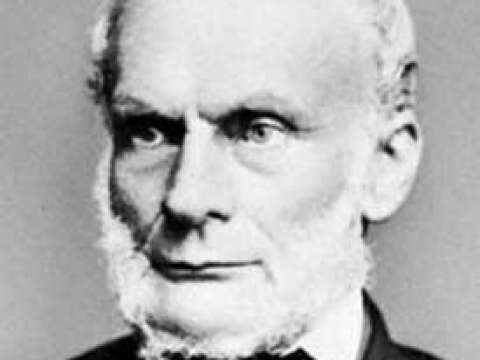 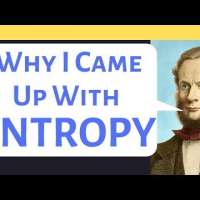 Entropy: Origin of the Second Law of Thermodynamics 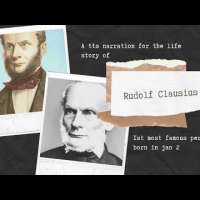 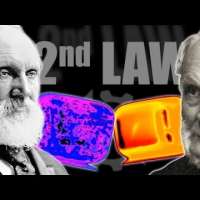 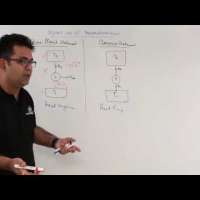 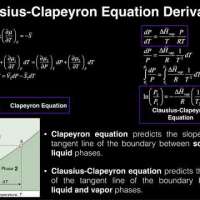 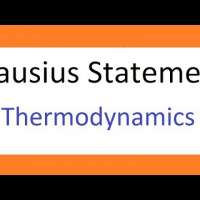 Clausius Statement Thermodynamics Tutorial
What Do You Think Of That Genius? 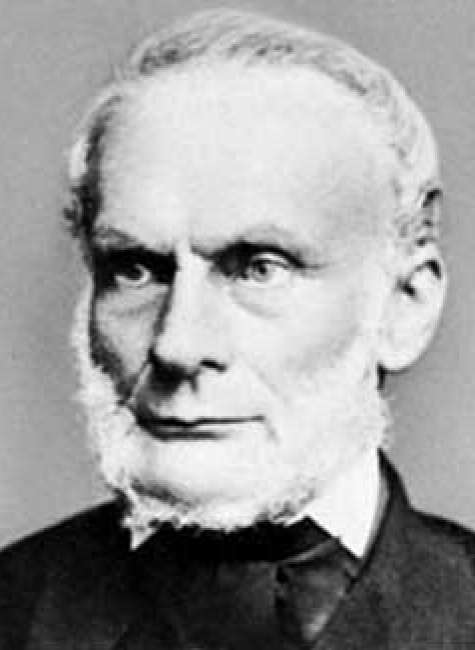 Physics
Rudolf Clausius and the Science of Thermodynamics
scihi.org
0 Comments