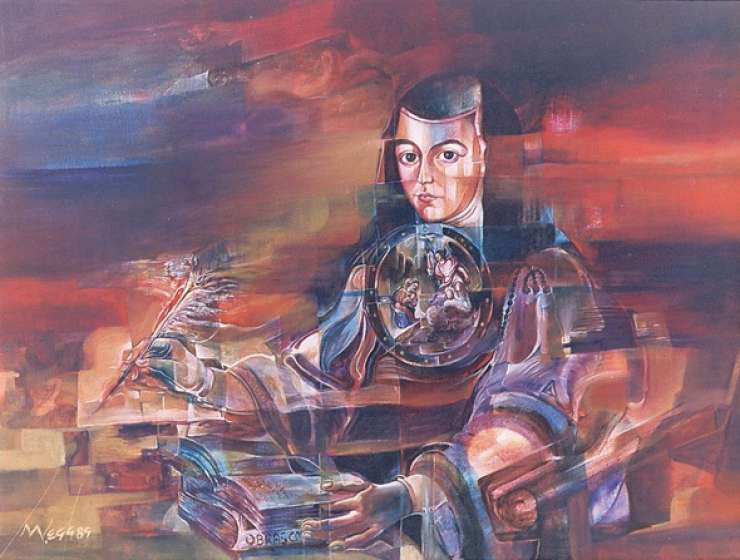 Miguel Cabrera’s posthumous portrait of sor Juana Inés de la Cruz (1648-1695) is a famous depiction of the esteemed Mexican nun and writer. Considered the first feminist of the Americas, sor Juana lived as a nun of the Jeronymite order (named for St. Jerome) in seventeenth-century Mexico. Rather than marry, she chose to become a nun so she could pursue her intellectual interests. She corresponded with scientists, theologians, and other literary intellectuals in Mexico and abroad. She wrote poetry and plays that became internationally famous, and even engaged in theological debates.

Born to a creole family in 1648, sor Juana was a child prodigy. At the age of fifteen, she amazed people at court by excelling at an oral exam that tested her knowledge of physics, philosophy, theology, and mathematics.

She came to live as a lady in waiting in the house of the viceroy (the substitute or representative for the Spanish king in Mexico). Shortly afterwards, she chose to become a nun instead of marry. She entered the Carmelite convent in 1667, but left a year later to join the Jeronymite order in 1669—and in the process gained intellectual freedom. The Jeronymite order allowed her to host intellectual gatherings and live a comfortable life.