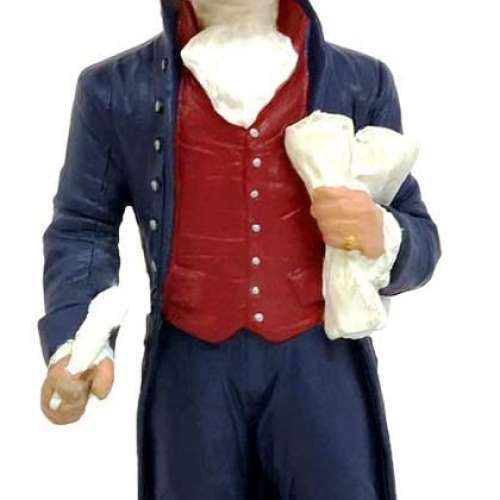 This Thomas Jefferson bobblehead is part of Royal Bobbles’ collection of scientists. This collection features scientists who made great contributions and discoveries. Thomas Jefferson was the third President of the United States, the principal author of the Declaration of Independence, and one of the most influential Founding Fathers. While he held several public offices, his service as president of the United States is widely remembered. Major events during his presidency include the Louisiana Purchase and the Lewis and Clark Expedition. Jefferson achieved distinction as, among other things, a horticulturist, statesman, architect, archaeologist, paleontologist, inventor, and founder of the University of Virginia. Throughout his life, Jefferson fought for political freedom, religious freedom, and educational opportunity for all. This exclusive, high-quality Thomas Jefferson bobblehead from Royal Bobbles features remarkable detail and is packaged in a colorful collector's box. Jefferson clutches the Declaration of Independence in his hand. This model is crafted with extreme attention to detail and is of the highest possible quality. View other bobbleheads in our collection to learn more about other scientists. All Royal Bobbles bobbleheads are about 8” tall and are made from highest-quality, heavyweight polyresin. Each bobblehead is hand painted, making each one unique. Each Royal Bobbles product comes with its own unique serial number on the bottom of the base to indicate authenticity.