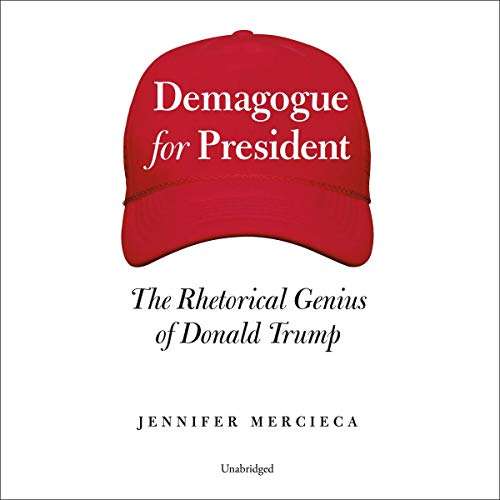 106
0
To genius page →
Demagogue for President: The Rhetorical Genius of Donald Trump

Historic levels of polarization, a disaffected and frustrated electorate, and widespread distrust of government, the news media, and traditional political leadership set the stage in 2016 for an unexpected, unlikely, and unprecedented presidential contest. Donald Trump’s campaign speeches and other rhetoric seemed on the surface to be simplistic, repetitive, and disorganized to many. As Demagogue for President shows, Trump’s campaign strategy was anything but simple.

Political communication expert Jennifer Mercieca shows how the Trump campaign expertly used the common rhetorical techniques of a demagogue, a word with two contradictory definitions - “a leader who makes use of popular prejudices and false claims and promises in order to gain power” or “a leader championing the cause of the common people in ancient times” (Merriam-Webster, 2019). These strategies, in conjunction with post-rhetorical public relations techniques, were meant to appeal to a segment of an already distrustful electorate. It was an effective tactic.

Mercieca analyzes rhetorical strategies such as argument ad hominem, argument ad baculum, argument ad populum, reification, paralipsis, and more to reveal a campaign that was morally repugnant to some but to others a brilliant appeal to American exceptionalism. By all accounts, it fundamentally changed the discourse of the American public sphere.