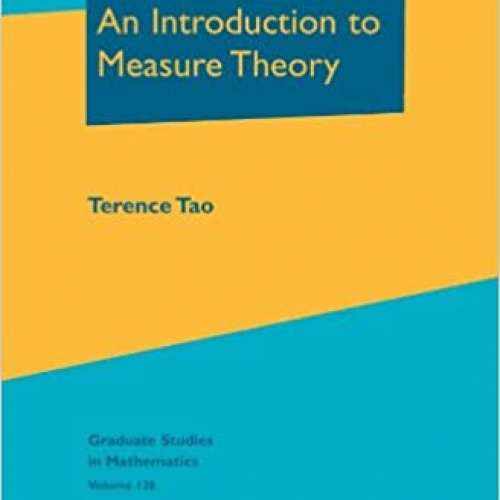 46
0
To genius page →
An Introduction to Measure Theory

This is a graduate text introducing the fundamentals of measure theory and integration theory, which is the foundation of modern real analysis. The text focuses first on the concrete setting of Lebesgue measure and the Lebesgue integral (which in turn is motivated by the more classical concepts of Jordan measure and the Riemann integral), before moving on to abstract measure and integration theory, including the standard convergence theorems, Fubini's theorem, and the Carathéodory extension theorem. Classical differentiation theorems, such as the Lebesgue and Rademacher differentiation theorems, are also covered, as are connections with probability theory. The material is intended to cover a quarter or semester's worth of material for a first graduate course in real analysis. There is an emphasis in the text on tying together the abstract and the concrete sides of the subject, using the latter to illustrate and motivate the former. The central role of key principles (such as Littlewood's three principles) as providing guiding intuition to the subject is also emphasized. There are a large number of exercises throughout that develop key aspects of the theory, and are thus an integral component of the text. As a supplementary section, a discussion of general problem-solving strategies in analysis is also given. The last three sections discuss optional topics related to the main matter of the book.