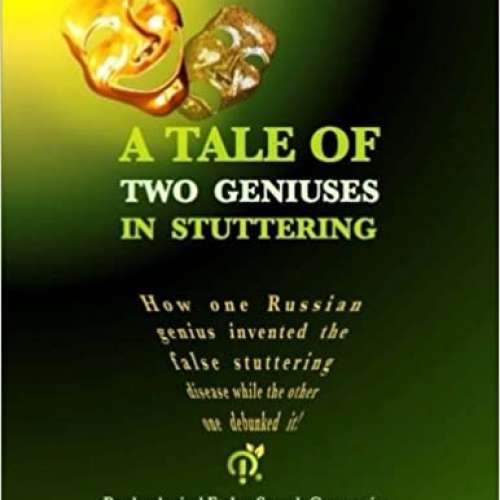 125
0
To genius page →
A Tale Of Two Geniuses In Stuttering: How one Russian genius invented the false stuttering disease while the other one debunked it!

A Tale Of Two Geniuses In Stuttering reveals the truth about the origin and debunking of the falsely represented disease called stuttering. It is a true story about the crime against humanity suffering from a universal deception for over 100 years. For decades, we’ve been hearing that speech fluency disorders are incurable medical conditions requiring medical attention. A Tale of Two Geniuses In Stuttering discloses the truth about historical events that took place in Russia at the end of 19th century. That is when the bogus stuttering “illness” was invented and accepted as a postulate in the international scientific community. You will learn how one Russian dishonest politician and immoral psychiatrist profited from fabricating his absurd, unproven “discovery” of the stuttering disease requiring a continuing cure and from creating an International bogus “help” system for stuttering patients. “Freedom from stuttering starts with understanding that it is not a neurological, genetic or any type of medical problem” – says Anna Deeter and Roman Snezhko, co-founders of the Speech Academie Etalon International By R.A. Snezhko, – “Various speech mistakes (e.g., repetitions, blocks, muscle tension, fear of speech and the like) are merely the actions stutterers perform because they simply never developed their body-mind coordination necessary for every speaker to produce naturally normal speech. Once a stutterer has learned and started following the natural norms/etalons of adequate speech, his stuttering disappears automatically – along with fears of speaking.” Roman Snezhko should know. He experienced his own stuttering nightmare, but was able to figure out its cause and eliminate it on his own over a short period of time at the age of 15. After having gained an extensive conventional and alternative education degrees in several areas of science, Academic R.A. Snezhko has devoted his entire life to the practical study of the functioning of human dynamic. He has discovered and introduced to the world many exceptional unparalleled breakthroughs. The elimination of stuttering is just one of them. Since 1998, he has educated over 3,000 Russian-speaking students who ended their stuttering permanently. Anna Deeter should know as well. A former conventional speech therapist, she felt frustrated because of failing to lead her students who stuttered to their stutter-free life and searched tirelessly for a reliable stuttering solution over 30 years of her professional career - until she discovered and learned the Etalon science from Academic Snezhko. She then started teaching this breakthrough in science and education to the English-speaking stutterers with the same 100% success rate. A Tale Of Two Geniuses In Stuttering outlines clearly the two choices you have today as a person who stutterers: 1. To continue believing the criminal lie of Evil Genius (seek a cure in unknown future for a non-existing stuttering disease and remain a stutterer for life). 2. To follow the advice of Good Genius (discontinue using all artificial techniques, methods, tips and devices for speech, awaken and use your own power to speak adequately naturally today). “I can teach you how you can unlock your latent power to help yourself… Sign up for your 3-day course of the Etalon Speech Gymnastics, coordinate your mind & body for you naturally adequate speaking action and enjoy your new stutter-free life forever!” ~ Anna Deeter, Etalon Speech Educator